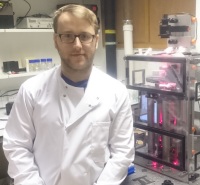 Robert completed his PhD in the dynamic control of evaporating droplets in the group (jointly supervised by Dr Volpe and Prof Parkin). In particular, he investigated a new method of controlling the deposition of materials from both stationary and mobile droplets. Prior to this, he carried out his undergraduate degree at Imperial College London, where his master’s focussed on the catalysts and mechanisms of the oligomerisation of ethylene. He then worked in industry in both pharmaceuticals and polycarbonate catalysis before starting his PhD. His current research interests are in chemical and physical non-equilibrium systems, and their combination.